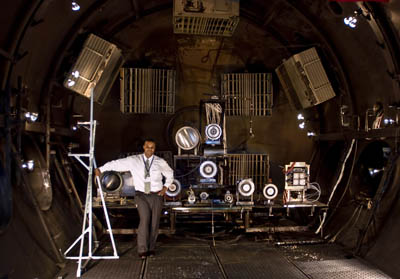 Founded in 1992, by Professor Alec Gallimore, the Plasmadynamics and Electric Propulsion Laboratory is now one of the world’s leading electric propulsion research centers. The centerpiece of the laboratory is the Large Vacuum Test Facility (LVTF), 9-m long and 6-m diameter cylindrical stainless-steel clad vacuum chamber. The chamber was built, in 1961, by the Chicago Bridge and Iron Company for the Bendix Corporation (see sketch to the left). Originally named the “Space Simulation Chamber,” early experiments investigated the development of Lunar Rovers (at one point the chamber floor was covered in sand for astronaut and rover lunar surface testing) and various other Apollo era research projects (view the Bendix “Lunar Exploration Reference Chart”). Additional information on the origins of the LVTF is available in the Jan-Feb 1961 issue of Bendix Orbit, a company newsletter from the Bendix Corporation. In 1961, the facility reportedly cost $10M USD. In 2010 dollars, this is roughly equivalent to $73M USD. The chamber was donated to the University of Michigan in 1982 and laid relatively dormant until Professor Gallimore came to the university to turn the facility into a state-of-the-art electric propulsion laboratory. To this end, the chamber’s original oil diffusion pumps have been superseded (in the 1990s) by a series of seven liquid-N2 baffled reentrant cryogenic pumps that reach a high-vacuum base pressure of 2x10-7 with a combined pumping speed of 500,000 liters-Air/sec (or 240,000 liters-Xe/sec). Initial research at PEPL, in the early 1990s, focused on arcjets, cathodes, and MPDs while work with Hall effect thrusters began in 1994. During the mid- to late-nineties, a series of Hall thrusters including: the End-Hall thruster, the 1.35-kW MAI Hall thruster, the D-100 TAL, the D55 TAL, the SPT-70, the SPT-100, the SPT-140, the PEPL-70 (designed and built by PEPL), the P-5 (a 5-kW thruster designed built by the AFRL/PEPL), and the Aerojet/Busek BPT-4000. Research with ion thrusters began in 1997 (thermal modelling) and 1998 (laser diagnostics) with PEPL testing the NASA built NSTAR (NASA Solar Electric Propulsion Technology Application Readiness) Functional Model Thruster version 2. The final flight version of the NSTAR thruster was used on the NASA Deep Space 1 (presently the ) and Dawn missions. During 2000-2010 research projects focused predominantly on developing advanced Hall thrusters and on gathering enhanced understanding of their underlying physics. Thrusters developed at PEPL during this time include the LGIT (2001), the P5-2 (2001, a PEPL/GRC collaboration), the NASA-173Mv1 (2001, a PEPL/GRC collaboration), the NASA-173GT (2002, a PEPL/GRC collaboration), the NASA-173Mv2 (2003, a PEPL/GRC collaboration), the 6-kW Hall Thruster (2006, a PEPL/AFRL collaboration), and the X2 (2009). Additional research during the 2000-2010 time frame included clustered Hall thruster studies (4xBHT-200-X3 in 2002, 2xP5 in 2003, and 4xBHT-600 in 2004), ion thruster studies (HiPEP MCDC in 2002 and NEXT LM4 in 2005), and micro propulsion work through the NanoFET program (2006). Various portions of these projects are ongoing today and a majority of these thrusters still reside within PEPL’s clean room in operational condition. In 2009, PEPL and the AFRL established MACEEP (Michigan/AFRL Center of Excellence in Electric Propulsion) and as a part of this multi-institution program, future higher power, ≥200-kW, EP thrusters are presently under development at PEPL for testing in 2011. 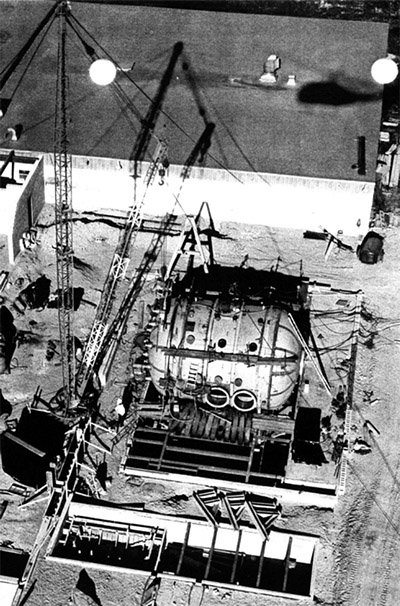 What is Electric Propulsion?

For satellite or deep-space missions utilizing chemical propulsion, a large percentage of the spacecraft wet mass is propellant. Due to vehicle mass and cost design constraints, this excessive amount of propellant decreases the mass available for payload. In some cases, the mass available for the payload is so small that the mission is no longer feasible within the design space.

Studies have shown that ideally, an engine which would be used as the primary source of propulsion for orbit transfer missions or for satellite station-keeping should produce exhaust velocities between 10-20 km/s. Cryogenic chemical rocket systems (e.g., the Space Shuttle Main Engines) are capable of producing exhaust velocities approaching 5 km/s and storable chemical systems that are currently in use for spacecraft propulsion have significantly lower performance still. It is apparent that a propulsion system is required that does not rely on energy addition through chemical reactions.

Electric Propulsion thrusters are such a design enabling technology, producing exhaust velocities on the order of 10-20 km/s (much larger velocities are possible). This significantly decreases propellant mass and typically increases payload. Drawbacks of EP are low thruster (compared to chemical rockets) and large power supply mass. In some cases, the mass of the power supply offsets the gains of choosing EP over chemical systems. However, recent advances in both EP and power supply technology are making these systems viable options for energetic deep-space missions, attitude control, and near-Earth orbit raising missions just to name a few.

PEPL has operated all of the thruster types described above. Early research efforts in the 1990s considered arcjets and MPDs. A majority of the research presently performed in the lab is focused on Hall thrusters and Ion thrusters.