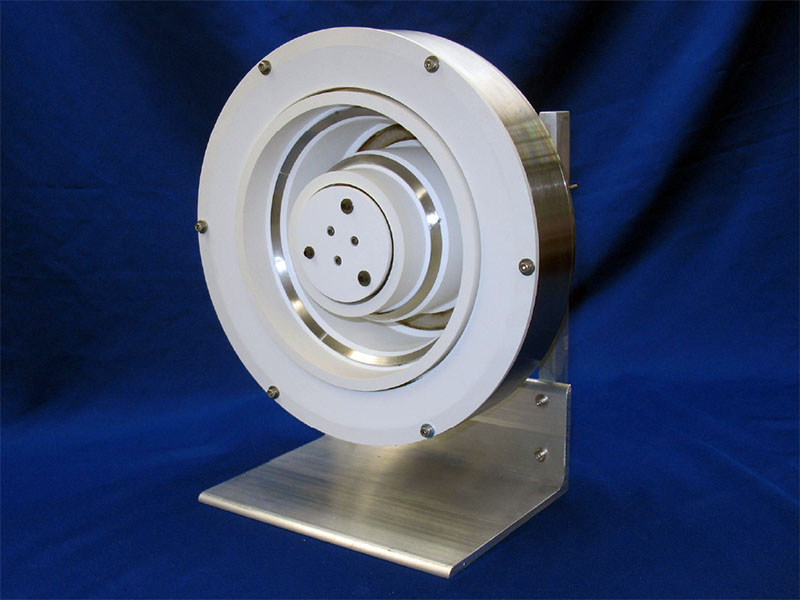 Photo of the HHT prior to operation.

“Helicon plasma sources have been studied since the 1960’s, with early studies focusing on their ability to efficiently produce high-density plasma for materials processing. Since that time, a considerable amount of development work toward using helicon sources in electric propulsion systems has been performed. Some of this work involves the use of a helicon source alone as a thruster, while other propulsion systems attempt to use the helicon source as an ionization stage, with a separate acceleration stage. Previous work has also demonstrated the operation of an annular helicon source, which may be applied as an ionization stage for a two-stage Hall thruster.”

“The Helicon Hall thruster (HHT) is a two-stage thruster designed to utilize the efficient ionization of a helicon plasma source with the acceleration mechanism of a Hall thruster. In particular, HHT was constructed to investigate whether the inclusion of a radiofrequency (rf) ionization stage could increase the overall efficiency of a Hall thruster operating in a high thrust-to-power, low specific impulse operating regime. The performance of the HHT was measured in the University of Michigan’s Plasmadynamics and Electric Propulsion Laboratory (PEPL) during the summer of 2010, and the results showed a trend that suggested performance could be improved when higher levels of rf power were used. A follow-on study was performed during the summer of 2011 with an improved rf power delivery system and thrust stand electromagnetic interference (EMI) mitigation scheme to confirm the results from 2010. During the follow-on test, the performance of the HHT operating with argon and nitrogen propellant was also measured.”

In these follow on tests, “the performance of the HHT operating in both single-stage and two-stage modes with argon, nitrogen, and xenon propellant was measured at the University of Michigan. Faraday probe, RPA, and Langmuir probe measurements in the far-field plume characterized the HHT beam divergence efficiency and voltage utilization. Beam divergence efficiency for nitrogen and argon propellant is lower than that expected for xenon at an equivalent discharge voltage and anode mass flow rate. Voltage utilization for argon and nitrogen is not significantly reduced, and so it is deduced that propellant utilization efficiency is also lower than that for xenon. Current utilization is a major source of anode inefficiency for nitrogen propellant, but not for argon. During two-stage operation, thrust is observed to increase slightly with rf power except at the 25-mg/s xenon propellant operating condition; however, thrust-to-power and total anode efficiency both consistently decrease with increasing rf power. The exchange parameters taken with limited probe results indicate that propellant utilization likely increases with rf power, but the increase is not sufficient to overcome the reduced efficiency due to the use of rf power.”

(This summary is quoted from the work of Shabshelowitz et al. in “Performance of a Helicon Hall Thruster Operating with Xenon, Argon, and Nitrogen”, presented at the 48th Joint Propulsion Conference in Atlanta, GA, 2012.) 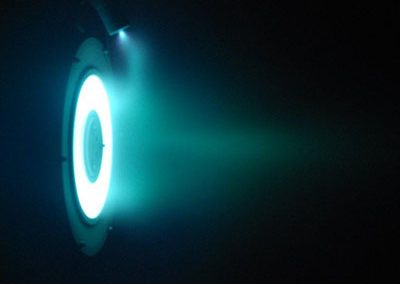 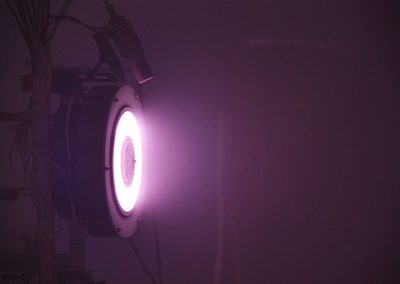